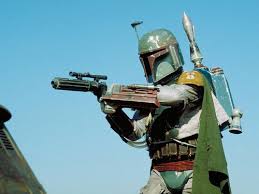 Side characters are essential to stories–they flesh out the background for the main character, give them someone to interact with, and oftentimes make excellent sacrifices! (If you need proof, watch any Star Trek episode where a random crewmember beams down to a hostile planet with the rest of the bridge crew!)

But sometimes side characters affect the readers (or viewers for movies/TV) SO much that there is a clamor to know more about them than what the writer originally intended. (Even my third book, REVENGE, is based off of a side character from my second book, IDENTITY.)

And I don’t mean sidekicks or anyone that gets massive amounts of screentime/ dialogue/ pages. I mean those random back-in-the-shadow characters that you know just enough about to be interested, but shouldn’t be important to the story.

I personally think Boba Fett is the best example of this. I mean, this character was first introduced in Episode V, fully masked, as a bounty hunter (among several others) to catch Han Solo. He barely speaks, you never see his face, and, though he continues on to Episode VI, is still hardly in the movie at all.

How did this character become such a HUGE draw for audiences? And why would he–and not so many others–develop such a cult following? Are there other side characters out there that deserve recognition? That should have their own spinoffs, action figures, and followings?

I’d love to hear your thoughts!

PS- Don’t forget, 2 weeks left to purchase any of my songs (http://www.cdbaby.com/Artist/ReneeKole) and have the proceeds go towards printing costs of my next comic book, HOLLOW’S PRISM: “Aftermath” due this fall!